This month was a whirlwind of revising, college, Easter holidays in which I did hardly any work, reading, watching movies and so much more. I read quite a lot of books this month since I put off revising for basically the whole two week holiday. Next month, my exams start so that’s going to be fun. But before I think about that, let’s talk about what I did this month.

First this month I read The Other Half of Happiness by Ayisha Malik which is the sequel to Sofia Khan is Not Obliged. I enjoyed this sequel, but not as much as I enjoyed the first book in the series. I liked how this book gave us a follow up to the traditional happily ever after ending as it felt a lot more realistic. I also liked how this book had a strong focus on female friendship, careers, family and Islam as a whole. I really loved this series but after the ending to this one, I would love another addition to this series as I want to know what happens next. I would easily read 10 books on Sofia Khan as she is such a lovable protagonist. I gave this book 4 out of 5 stars.

After that I read One Italian Summer by Keris Stainton which tells the story of a family who go on their annual holiday to Italy without their dad for the first time since he died. I really loved this book. It was short, sweet and very realistic. It had a romantic aspect but it mainly focused on family and grief. YA is missing stories about grief and how to deal with it and this book filled that hole. It made me want to immediately go on holiday to Italy as well as making me want to spend more time with my family. Family relationships aren’t touched on enough in YA so I feel like this book is something special. It did remind me a lot of Rainbow Rowell type book but obviously that’s a great thing in my eyes. I gave it 5 out of 5 stars and I want more. Definitely going to get Keris’ other novels.

After that I picked up Geekerella by Ashley Poston which is a modern day geeky retelling of Cinderella. I really enjoyed this book as it was equal parts adorable and funny. I liked the fandom aspect of it because it felt very realistic for fandoms of today. The romance reminded me a lot of the Disney Channel film Starstruck (which was my favourite film when I was younger!) so I found it extremely cute. I would recommend this book if you want a quick and cute read with an adorable couple. I gave it 4 out of 5 stars.

Next I read another adorable YA romance which was Alex, Approximately by Jenn Bennett which is about a girl who moves in with her dad across the country with a goal of finding her online friend, Alex, in real life without him knowing that she was there. When she moves, she falls for the incredibly arrogant Porter instead. I really enjoyed this romance as I thought it was incredibly cute and it was a fun read. I read it in one sitting and couldn’t put it down until 2am. I recommend this book if you want another cute read that you won’t want to put down. I gave it 4 out of 5 stars.

After that I picked up Operation Prom Date by Cindi Madsen which is another cute YA romance about a girl who is obsessed with shipping couples together and her love story with Cooper. It was cute, adorable and I couldn’t put it down. I read it all in one sitting until 1am and this is exactly the type of book I want to read when I’m stressed about exams because I honestly forgot about it straight away but it helped me relax and escape for the few hours I was reading it. My main problem with this book was the fact that everything happened too quickly, I wanted more cute moments between the main 2 characters but I still gave it 3.5 out of 5 stars.

You’ve Got Mail sort of situation. This book was okay but it wasn’t great. I thought everything definitely happened too quickly, especially the online chatting. Due to this, the romance didn’t feel as cute because it seemed to come out of nowhere. I also thought it wasn’t very original, especially since the game in this novel was a rip off of Pokemon Go. It wasn’t great so I gave it 2.5 out of 5 stars but I did struggle to put it down and read it in one sitting. 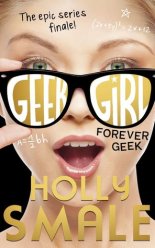 Then I read the final book in the Geek Girl series which was Forever Geek by Holly Smale. I love this series so I was very excited to pick up the sequel. As with all of the previous books in this series, I read the whole thing in one sitting and it was just wonderful. I loved being back with these characters and seeing what mess Harriet got herself into this time. I’m sad that this is the end of the series but it was a great ending. I would have liked to have had an epilogue to see what happened to all of the characters after but that’s just me. I gave it 4 out of 5 stars.

Then I picked up There’s Something about Nik by Sara Hantz where the plot is basically exactly like the film, the Prince and Me. I did not like this book. Nik was an arrogant ass, Amber had basically no personality and their romance had nothing to it. There was literally no cute moments and no moment where I thought that they were a good couple. I would not recommend this book and I gave it 2 out of 5 stars.

After that, I read Always and Forever, Lara Jean by Jenny Han which is the final book in the To All the Boys I’ve Loved Before series. I was a massive fan of the first two books in this series despite not liking the main love interest. The first two had separate love interests for me to root for even though it didn’t work out my way. However, I didn’t love this one as much. I still have a problem with Peter and I have a problem believing their relationship. I just don’t see it, I’m sorry. This book felt like it was going to go in a different direction and I was so excited for that but then it didn’t. I can only give this book a 3.5 out of 5 stars.

I actually posted one post this month that wasn’t a wrap up or part of a blog tour! WHOOP!

From Scholastic this month, I received The Lines We Cross by Randa Abdel- Fattah which sounds like a fantastic read that I can’t wait to get to.

I actually did buy a book this month! I picked up Always and Forever Lara Jean by Jenny Han which is the final book in the To All The Boys I’ve Loved Before series.

First I watched Break Ke Baad(After a Break)which is about two childhood sweethearts going through relationship troubles and finding their ways back to each other. A lot of people say this is one of their favourite Bollywood rom coms so I decided to see what the fuss was all about. I did end up really liking this movie and I found it fun to watch but it’s not a film I would watch multiple times. I love Deepika and Imran(come back to Bollywood Imran!) so it was fun to see them two together but it’s not a film I completely fell in love with. I gave it 3 out of 5 stars. Also can we just appreciate how I watched half of this film without English subtitles. Who knew that by watching Bollywood movies, I would end up slowly teaching myself and understanding Hindi. Whoop.

and that was all I needed to know for me to watch it. The Netflix summary of this film was a bit misleading (this happens a lot with Netflix summaries of Bollywood movies) as it didn’t suggest that it was an action crime drama thriller film. I enjoyed the parts with the children the most. The love story was meh, nothing really interesting or special. The mystery/police investigation aspect was really obvious so it didn’t keep my interest as much as I would have hoped but I still had a lot of fun watching the film. I especially loved the song I Am Sorry because it was so cute and adorable. I gave it 3 out of 5 stars.

Then I watched Mujhse Shaadi Karogi (Will You Marry Me?) which is a Bollywood romantic comedy about a love triangle where both of the guys are trying to woo the girl. I enjoyed this film because it was stupid yet still funny. I’m not a Salman Khan fan but the film was entertaining because of Akshay Kumar. Priyanka was beautiful but she really did nothing in this film except for dance in the songs but hey that was most movies at this time so it’s cool. The songs in this film are iconic as I recognised most of them so they were great. I’d recommend it if you want something stupid to laugh at but it’s definitely not one of the greatest films I’ve ever seen so I gave it 3 out of 5 stars.

I then watched an English movie (SHOCKER) which was Guardians of the Galaxy Vol 2. I love Marvel movies so obviously I went to see this opening weekend and it was fantastic. I love the Guardians series because it perfectly mixes in humour with the action so it isn’t depressing. I think this sequel is miles better than the first one for many reasons. The storyline was more entertaining, the humour was better and the overall character arcs were better. I can’t wait for Infinity War now. This film is my first 5 star film of the year!

I also rewatched quite a few movies this month such as Raees, Dear Zindagi, Band Baaja Baaraat and Fantastic Beasts and Where to Find Them.

I’ve slightly lost my way with my TV shows for a bit. I plan on catching up after my exams because the only two that I’m caught up on are Crazy Ex Girlfriend and New Girl. I have been watching On Air With AIB on Hotstar though which is fantastic because I love AIB. (My obsession with them grew this month)

Nope. None. There were a few I wanted to go to like the Angie Thomas event but I didn’t end up going. I probably won’t go to any in a while.

One Italian Summer by Keris Stainton

Guardians of the Galaxy Vol 2

Nothing really. Just a whole bunch of stress for most of the month.

So that was April. May and June are going to be the worst months of my life so far so that’ll be fun. You probably won’t hear much from me except for wrap up posts but I’ll be back with a bang after my exams finish on the 27th June.